The cloud and AI/ML landscape keep on shifting and growing and it’s hard to keep up. There is a constant stream of new products, technologies, and ideas. But when it comes to business and investment books, the change of pace is slower, and many books are a rehash of old concepts, so coming across big new ideas or insights can be a rare event. One such book that had one of those powerful nuggets is a  more than 20 year old book “The Gorilla Game; Picking Winners in High Technology” by Geoffrey A. Moore, Paul Thompson, and Tom Kippola. 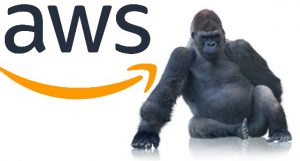 I am paraphrasing the main ideas from the book and reading the book is highly recommended to get deeper into the book’s concepts, but here is the summary:

PC and laptop business – The personal computer business is a good example a commodity business. Microsoft won the operating system gorilla game for PC’s, but the hardware that runs the OS is a separate game and it’s a royalty market. I don’t know about you, but whenever I buy a new laptop, I don’t really look at the brand and I look more at the features (CPU size, hard drive capacity, etc.) In this precise moment, I have the “privilege” of having to lug three laptops for my work (two client laptops and one company issued laptop) and they all have different brands (HP, Dell, and Lenovo). I can seamlessly work across all three laptops because they all run on Windows. This last example shows that you can have gorilla games within the same product and the gorilla game occurs within the product components. Another example here is the processor. For the most part, Intel has been the gorilla here. This dominance got somewhat upset by legal ruling awarding AMD royalty-free license to some of Intel’s patents and the ability to create Intel-compatible chips.

Spark and Hadoop – Open source software in general and Spark and Hadoop in particular, are good examples of another royalty market. Databricks, Hortonworks, Cloudera and MapR all offer a flavor of Spark. They are all trying to differentiate themselves by adding value (and proprietary features) to their stacks but if a client’s implementation remains somewhat vanilla, it will be fairly easy to migrate from one stack to another.

Oracle and relational databases – Even though relational databases use the SQL standard, vendors are constantly offering extensions to this standard. This is an attempt to create proprietary features to lock in customers. The more customers use these features, the more difficult it will be to port to a different database vendor. The success in the relational database market has enabled Oracle to fund other ventures and branch out into other technologies and “games”. They have been unable to fully leverage the same success they experienced in the RDS market to become full-fledged gorillas in other markets.

Cisco and routers – Cisco was able to dominate the router market. To this date, they dominate that market (even though it’s no longer a hypergrowth market). They were able to create many proprietary features that encouraged vendor lock-in. As it happens sometimes in these markets at some point, their biggest competition became their own routers that they had released a few years prior. The market got to the point where 2-year-old technology was good enough for most use cases.

ServiceNow – We include this example to demonstrate that a gorilla game does not have to be a trillion dollar market. ServiceNow is a software-as-a-service provider, providing technical management support, such as asset and license management, to the IT operations of large corporations, including providing help desk functionality. The company’s core business revolves around the management of “incident, problem, and change” IT operational events. They are laser focused on this market and even though it’s a small market, it dominates it.

It’s Jeff’s world and we just live in it

This brings us to the main focus of this article. I work for a consulting company and we get paid to recommend to our clients the best and most valuable products regardless of the vendor. I don’t work for Amazon and I don’t receive any compensation to endorse their products but it’s my belief that we are currently witnessing the biggest gorilla game in the history of computing. AWS has figured out a way to lock in their customers starting at the hardware level and continuing from there. An enterprise certainly does not have to commit to using the full AWS stack, but Amazon sure makes it easy to do so. For example, you can spin up an EC2 install and install MongoDB on it, but you might instead decide to use DynamoDB (the AWS NoSQL offering) and take advantage of it’s elastic and serverless properties and let AWS take care of the management of the instance.

Once an enterprise makes a commitment to a cloud provider in any kind of significant way (beyond POC’s and to run production workloads), there is a learning curve and a lock in that must occur. Some of the tasks that might need to be performed:

Some readers might take offense to this but I believe trying to achieve a cloud provider agnostic environment is a terrible idea. Cloud providers are predictably trying to add as many proprietary features to their environments and trying to differentiate their offering even it’s not necessary. What’s the difference between Google Compute Engine (GCE), Elastic Compute Cloud (EC2), and Azure Virtual Machines (AVM)? Not a whole lot, these are the names that Google, Microsoft, and Amazon give to the cloud compute instances but they all use different names to differentiate themselves and start the lock-in process. For all the reasons listed above, and many more than we can continue to list, the switching costs between clouds are quite significant. Trying to straddle say three providers will force your organization to spread itself thin across those providers instead of becoming a master of one.

Committing to a provider does not mean that you must only use the services in their technology stack. Providers are fully aware that allowing some interoperability provides them a competitive advantage. So, for example, there is nothing stopping you from using Google’s TensorFlow libraries in AWS Sagemaker but using Google’s Azure’s and AWS’s storage solutions interchangeably immediately creates additional headaches that would not be present with only one provider. For example, running an Athena query against S3 is a simple exercise. Running Athena against Azure Storage is not trivial.

Pick a horse and stick with it

Assuming you have bought my argument against cloud agnosticism, we are now left with the decision to choose between the top cloud candidates. First, let’s narrow the race to three contenders – Google Cloud Platform (GPC), Azure and AWS. Others will argue, but I don’t think anyone else is a gorilla candidate. There is still a chance that Azure will become the gorilla and to a lesser degree, GPC also has a long shot. However, I posit that there is a lead candidate. The most likely choice to become the gorilla is AWS. Following are some statistics to back this choice.

Gartner – For the eighth year in a row, AWS has been named the top pick in Gartner’s magic quadrant. The only other two vendors in the leaders’ quadrant are Google and Microsoft.

Market share – It’s not easy to determine specific revenue for Azure and Google Cloud Platform since Microsoft and Alphabet don’t necessarily break these numbers down in their financial reports but Canalys performed a study and ranked the top three providers in terms of market share. AWS leads the pack with about a third of the market. Microsoft comes in second with a 15% market share and Google rounds out the top three with a 5% share.

Breath of services and features – AWS is continuously adding additional services and features to its technology stack. As of April 2018, it offers more than 102 services in 19 categories including security, compute, storage, networking, databases, analytics, deployment, mobile, Internet of Things (IoT), Artificial Intelligence, Machine Learning, Robotics to name a few.

We are witnessing the biggest gorilla game in the history of tech. Azure still has a chance, but it will be an uphill hard-fought battle to catch the current market share leader. If AWS entrenches itself as the gorilla and if history stays true, it will be all but impossible to debunk the leader until there is yet another paradigm shift and we begin another gorilla game different from the cloud. Just because a gorilla emerges doesn’t mean that chimps will die and in many cases thrive. A great example of a successful chimp is Apple both in the PC business and to some degree in the phone business. Android has a bigger share of the market but few people would argue the i-phone’s success. However, once the gorilla emerges rarely does it get toppled and slip to number two.

Lastly, I realize that this is more of an opinion piece and there is a lot of room for other opinions. I encourage to put your thoughts in the feedback section below, even and especially if you disagree.